The 40-Year-Old Version is a delightful movie cursed with a title that is bound to confuse people.  No relation to Judd Apatow’s 2005 sex comedy The 40-Year-Old Virgin, it’s a smart, funky, frequently hilarious self-portrait of first-time-filmmaker Radha Blank, a New-York-based playwright and rap artist, as she contemplates the risks and possibilities of artistic reinvention.  While the movie is obviously scripted, Blank plays herself, and we’re led to assume that the story she’s telling here must be her own.  It’s too specific and too sharply observed to be anybody else’s.

The pleasures of Acting-with-a-capital-A are reason enough to see The Trial of the Chicago 7, Aaron Sorkin’s slick dramatization of the events surrounding a momentous clash between police and anti-war protestors at the 1968 Democratic National Convention.  It’s a film that celebrates the eclectic solidarities and unlikely allegiances of the radical Sixties, as militant Black activists like Bobby Seale sat in court alongside white suburban pacifists like David Dellinger, and college students like Tom Hayden reluctantly allied themselves with Abbie Hoffman and the Yippies.  More interesting than Sorkin’s perfunctory reenactments of the riots are the conflicts between the men themselves—between clean-cut WASP kids like Hayden, who believes that a sense of decorum must be preserved even when one is taking a stand against the U.S. government, and mop-headed stoners like Hoffman, who thumbs his nose at authority and frequently interrupts the trial proceedings with wisecracks.

2018 marked the fiftieth anniversary of the premiere of The Boys in the Band, Mart Crowley’s incendiary play about nine gay men, written at the very earliest stirrings of the modern gay liberation movement.  So much about gay life in America has changed in those fifty years that the play can’t help but feel a little bit like a museum piece, a relic from an era when gay bars were still subject to police raids and live-in lovers felt compelled to refer to themselves as “roommates” in the company of straights.  And yet there’s still plenty that’s relevant and fresh about Boys, which director Joe Mantello has now adapted into a smart and snazzy film for Netflix.  Perhaps most importantly the movie preserves the performances of the talented ensemble cast from the hugely successful 2018 Broadway revival, all of whose members (as the filmmakers have noted with some pride) are openly gay.  That doesn’t sound like such a feat until one realizes it would have been impossible in 1968 when the play first premiered.
Read more »
Posted by Ian Scott Todd No comments: 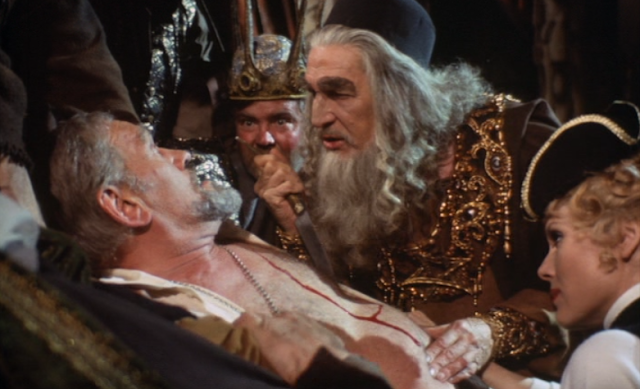 A lifelong fan of horror movies, I’ve always had a soft spot for Theatre of Blood (dir. Douglas Hickox, 1973), which I first saw on late-night cable in 1990 or 1991, when it played a double bill with Motel Hell (1980).  Vincent Price plays Edward Lionheart, a tragedian of the London stage continually panned for his scenery-chewing performances, who conspires to kill each of the city's theatre critics in the manner of Shakespeare’s plays.  One is knifed to death on the Ides of March, a la Julius Caesar; one is drowned in a barrel of wine, after Clarence in Richard III; one is made to gorge himself to death on meat pies made from his beloved pet poodles, like Tamora from Titus Andronicus.  Another loses a (vital) pound of flesh in a twisted take on The Merchant of Venice, one in which Portia—Lionheart’s devoted daughter, played by Diana Rigg—fails to intervene on behalf of Antonio and instead hands over the knife that Lionheart as Shylock will use to cut out his heart.  (“Only Lionheart would have the temerity to rewrite Shakespeare,” quips another of the critics upon receiving said heart in a box.)

Only Vincent Price could really pull off the role of Lionheart, whose egomania and vanity are somehow touching even when his eyes glitter with malice and his lips curl into a devil’s smile.  Like Lionheart, Price was never really taken seriously by critics; the difference between the two actors is that unlike Lionheart Price never really aspired to greatness.  Knowing his limitations, he chose to make a long and prolific career giving fun, schlocky performances in the horror movies of Roger Corman and William Castle.  By the time of Theatre of Blood Price’s name was synonymous with camp-horror, and he had already begun to parody himself in movies like The Abominable Dr. Phibes (dir. Richard Fuest, 1971). 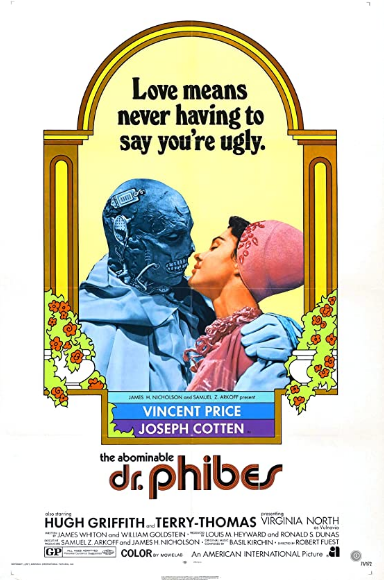 What makes Theatre of Blood so delightful are its layers of self-referential irony (Price as a limited actor playing a bad actor who thinks he’s a great actor), and its playing fast and loose with highbrow culture versus lowbrow culture by mixing horror with Shakespeare (whose name, then as now, signifies “taste”).  Price’s butchering the classic monologues from Hamlet and King Lear, frequently capping them with groan-worthy punchlines of the type found in the E.C. horror comics, is high travesty.  Then again, Theatre of Blood reminds us that before Shakespeare became canonized he was himself a purveyor of gory burlesque.  The difference between Titus Andronicus and, say, The Abominable Dr. Phibes is not so very great.